A little while ago, I received an email with a a spelling question from Coleen, a teacher at Athena Academy, a school for dyslexic students in Palo Alto. I have had the pleasure of working with teachers and students there over the years, and it is clear that their work with structured word inquiry keeps getting deeper and deeper.

What I love about questions like Coleen’s is how they reveal that the most important result of new learning is the ability to perceive ever richer questions to investigate. After responding via email I asked if I could share our exchange on Real Spellers to help others gain from this line of inquiry that I know everyone who seriously studies suffixing changes will eventually encounter.

Here is the great question I received from Coleen followed by my response that I have edited in places for greater clarity:

As I put together my spelling lessons for middle school this week, I wanted to check on my reasoning for one set of words.

For words like: manageable, serviceable, knowledgeable, replaceable, changeable, and noticeable

Is it true that the <e> at the end of these words, before you add the suffix, is not considered a single silent <e> because the <e> is needed to maintain the pronunciation of the 'soft g and c?'

This is great thinking!

There is just a bit of refining needed to bring precision and clarity to your understanding...

To my understanding the final <e> of <manage> <service> <replace> <change> and <notice> are final non-syllabic <e>s (commonly referred to as “final, single, silent <e>s”). I personally still have questions  about <knowledgeable>, so I'll leave that one aside for the moment and come back to it.

However, you are exactly right about the need to retain this <e> in these words for a phonological convention. Key to making sense of the question you have uncovered is to recognize that some word construction processes require more than one step. The “two-step word sum” brings the clarity you are seeking for your question, and other situations you will encounter in the future.

If I take the word <notice> and I add the vowel suffix <-able> and apply the suffixing conventions I get this...

I mark the suffixing change showing the vowel suffix <-able> replacing the final non-syllabic <e> of the stem <notice>. But now I see that the result is not a possible representation of the pronunciation of the word English speakers recognize. There is no /k/ phoneme in this word, and given the phonology of <c> we cannot have a <c> with an <a> immediately following represent the /s/ that we need as shown in this digram about some key features of the phonology of <c> from Real Spelling: 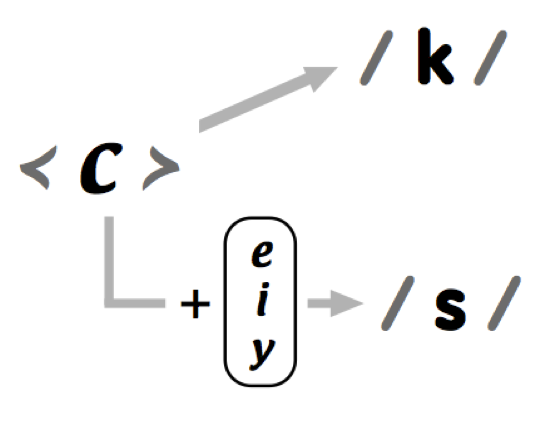 Since the first step of our word sum resulted in a “non-standard spelling” or “not possible spelling”, we mark this initial result of this word sum with an asterisk to mark that recognition.

By hand I write the "reinserted <e>" above the <c> and <a> of the second step. In computer I've used parentheses.

The way I announce the final spelling of this word sum is...

See the page in my book with tons of matrices to test the final single silent <e> conventions with the matrix for <agree> to see another two step word sum for the word <agreed>. That one is not for a phonological reason.

One thing I love about this question is how it helps us see the key value of the word sum as a scientific tool. When we can't find a way to resolve a word sum, we are being presented with evidence of a gap in our understanding -- and thus a rich area for inquiry.

The failure to resolve a word sum is a gift.  It shines a light on an area of orthography where we need to focus our attention. The most important thing is to hold strong to scientific principles and avoid the temptation to jump to the assumption of “spelling exceptions”. That temptation can be strong as it is built over decades of learning in the context of false messages about spelling as irregular and full of exceptions.

When we are given the gift of being surprised at a word sum not resolving the way we expect, we have not been given evidence of a "spelling exception" but the opportunity to learn something new. When we accept the assumption of “spelling exceptions,” we throw a way the gift of recognizing falsification of our assumptions. Falsification is the core of scientific thinking. As word scientists, we should be delighted when a word sum helps us see a flaw in our understanding. There is no need to find “the answer” right away. But scientists are always looking for clarity on the edges of what they do and do not understand. Knowing that we don’t understand the suffixing in a word like <noticeable> is a scientific discovery whether or not we resolve it. It offers the possibility of deeper learning.

Accepting that <noticeable> must be a “spelling exception” because our first encounter with it fails to meet our hypothesis is a way of holding on to a misunderstanding even though it has been falsified for us by the words sum. There is no learning or joy to be found by holding on to misunderstandings. I encourage word scientists of all ages to respond with joy to the discovery of what we don’t know. When a student or teacher asks me a spelling question that I hadn’t thought of before and can’t resolve, I hope my response is to say something like, “Excellent! I have no idea. Let’s check it out!”

I was most impressed with Colleen’s question because she made no hint of thinking that she found an exception. Instead, she offered a hypothesis that turned out to be very much on the right track. By explaining her thinking, she also told me exactly what feature of word sums she needed to understand to resolve her questions about many of these words. And that new feature -- the two-step word sum -- is such an important feature of morphological analysis that will resolve all sorts of questions that she and her students will encounter in the future.

That is how scientific inquiry moves understanding forward. It helps us identify what we do not understand so that know where to study. When that study results in new understanding that explains more data (spellings in this case), that new learning that allows us to perceive new questions more clearly.

My own introduction to the two-step word sum was in the context of trying to make sense of the spelling of <picnicking> during my first year of working with Real Spelling. I remember telling Old Grouch that I did not except that there was a suffixing convention where you “added a <k>” . His matter-of-fact response was that I was right. We never “add a <k> in suffixing.” At first that confused me even more.

When we worked through my question with a two step word sum, and saw which grapheme could and could not be used in this word, not only did I get my needed introduction to this two-step possibility of word sums, I came to understand the nature of the difference between letters and graphemes in a way that transformed my understanding of spelling. In my response to Coleen, I mentioned that I introduce the two-step word sum in my book to make sense of the spelling of <agreed>. While that process of word construction has nothing to do with phonology, my earlier experience with two-step word sums made it so easy to understand the construction process of <agreed> as I was already comfortable with word construction sometimes requiring two steps to resolve.

Finally, I return to my comment that I still have questions about the word <knowledgeable>. My issue there is that my current understanding is that <dge> is a trigraph for /ʤ/ in <knowledge>. If that understanding holds, I don’t know how to maintain that it has a “final non-syllabic <e>”. I don’t think a digraph or trigraph could contain within it a final, non-syllabic <e>. I do know that the spelling <acknowledging> is the attested form, so I would use this word sum for that word.

This word structure suggests that the stem <knowledge> does have a final, non-syllabic <e>.