I received a great email from a teacher recently and the discussions it provoked were so rich that I asked to share it here so others could learn from their QUESTions. Here was the first email...

I was working on Activity #8 from your book with my students. We encountered the word courageous. We are stumped as to why we do not replace the <e> on courage when adding the <ous> suffix? I know when I attended your course we touched on this, but I can't find it in my notes.

Your assistance with this would be greatly appreciated.

For reference, here is a screen shot of the page from my book that she mentioned...

I received her mail on a Monday and started to respond. Then it dawned on me that if she happened to be free that day, she could bring this question to my "Free Weekly Digital Drop In" session. (See HERE for details - anyone always welcome.) It would be far richer to discuss her question than email about it, and then whoever joined that session would get to learn from and add to the discussion.

As luck would have it, Arlene was able to join and we worked through how to address this question. It turns out that this is a common question and requires an introduction to the idea that sometimes, the construction of  a word is not resolved in a single step. Instead in some circumstances, two orthographic conventions bump into each other and a second step is needed to resolve it. I do explain that process in my book near the beginning in the lesson on that addresses the spelling of "agreed".

I also regularly point people to a 2016 post I made on Real Spellers HERE titled, 'Noticing the two-stepped word sum' that I recommend people explore as well.

A few days later, I got a follow-up email from Arlene who had taken her learning from our Zoom discussion to her students which helped them identify more questions about this idea of how to know when you need this 'two-step' process. This is the great thing about being introduced to a new concept and taking it to your students. It is in that context that you are likely to identify more precisely what you don't understand and thus a chance to refine that new learning.

My response to that new question revisits ideas from the Zoom conversation provides other examples and more precision about when the need for a 'two-stepped' word sum is provoked. I asked Arlene if I could share that correspondence, and she was happy too. I hope this disucssion is of interest to others.

I'm pasting our email correspondence with my response embedded in the text of Arlene's mail...

Good to hear from you.

Thanks for helping me with  the word <courageously> yesterday.

Great to have you help the session with your question!

When explaining what I learned, to my students today, I had them come up with other words that have the same <g> sound as courage.  I have a question about <large>.  large + er --> larger   Do we drop the <e> on <large> because it is a monosyllable or is it also a 2-step word sum?  When I work through the suffixing chart it tells me to drop the <e>.  How do I go about explaining to the kids when to do a 2-step word sum?

Also consider what would happen if we added an <-ing> suffix to this base in constructing the word “enlargement”
en + large/ + ing—> enlarging
Notice that we don’t need a second step because the phonology still works. Now the <g> grapheme can represent the /dʒ/ phoneme because there is an <i> following the <g> grapheme, this time from the <-ing> suffix.
But let’s suppose for a moment, that there was a word with the base <large> base taking on an <-ous> suffix which was pronounced with that ’soft <g>  ( /dʒ/ phoneme). I know of no such word, but watch what would happen with the spelling if this word entered the English language…
large/ + ous —> *largous
Now, because this vowel suffix replaces the final, non-syllabic <e> of the base, we end up with a <g> followed by an <o> of the <-ous> suffix. In this situation, the two step word sum would be invoked to ‘reinsert the <e>' before adding the suffix…
large/ + ous —> *largous —> largeous
A parallel example...
Notice that with ‘courageous’ and ‘noticeable’ the reason we need a ‘second step’ in the process is that the suffix added does not begin with an <e>, <i> or <y>, which makes the phonology of the not work. 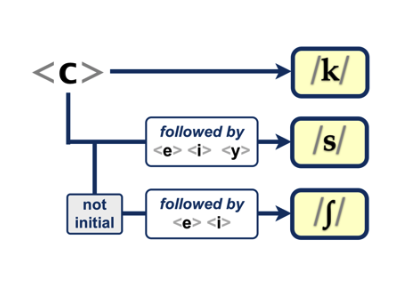 I think of it this way. In order to invoke the need for a ‘two step word sum’ the default word construction needs to result in a conflict in orthographic conventions that can be resolved in a second step.
With the word sum for ‘agreed’ from the second part of activity 2, we ran into a different conflict…
agree + ed —> *agreeed
The default word construction here results in a non-allowed sequence of 3 letters, so we ‘re-write’ those <eee> as <ee>.
agree + ed —> *agreeed —> agreed
So here the need fora  two-step word sum was not to preserve a convention of orthographic phonology, but instead to ensure that the spelling conforms to the ‘three letter rule’ that no complete English word can have the same letter three times in a row.
Great stuff Arlene.
I hope that discussion helps others too. Don't forget to explore  HERE for more on 'Noticing the two-stepped word sum'!