From 'bio' to 'bi' William brings leisurely scholarship to life!

Click HERE to see a wonderful 2-page document by William Van Cleave from 2020 that I just came across. He titles it "Growing Pains: Recognizing (and Coming to Accept) <bi>" that traces his years long scholarly investigation of words with these structures. I've pasted the matrix on the bound base <bi> that he created and included in that piece. Make sure you don't just learn from the matrix he built. Understanding William's journey to be able to build this matrix confidently is far more important. 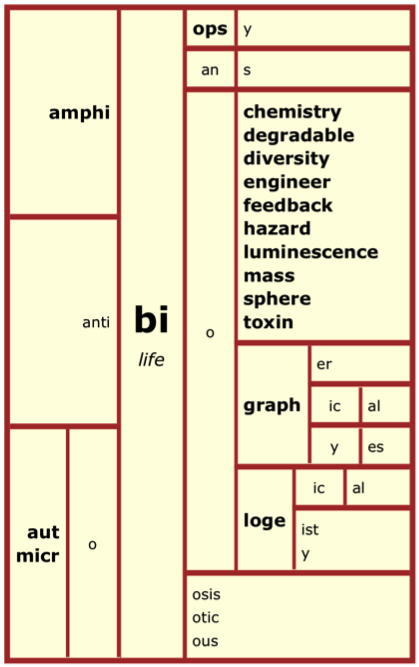 Below is some context that I hope builds on what William offers us that you may want to consider before or after reading William's piece.

I came accross this because I was preparing a response on one of the SWI Facebook groups that was looking at the word "homophone" in an attempt to understand how to determine if the second letter <o> was part of a base spelled <homo> or if it was a connecting vowel letter <o>. This is such a rich question to investigate. It is one of these orthographic questions that I think everyone working with SWI will encounter. And often, it is a particuar encounter with this question in a particular word in a particular context that provokes a leap in depth of orthographic understanding that informs understanding of countless words.

For me, the most memorable encounter with this word was visiting my friend Skot Caldwell's grade 4/5 class in a pubic school in a very disadvantaged area of Kingston. His kids had built a word web on what they took to be a bound base <auto> from the Greek root aut(os) for 'self'. They had all sorts of great words in that family such as: automatic, automobile, autograph and others. At one point when the kids were working in groups, I mentioned to Skot that my guess was that the <o> at the end of <auto> was actually a connecting vowel letter, and not actually in the base. But I quickly added that even if I was right, that doesn't make their word web 'wrong'. It is fine to treat something that is actually complex as a base until we are confident we know how to analyze it. (Years later I learned that we can use the term "basal construction" for a base with another morpheme.) I also pointed out that it only really matters if we find a word with the <aut> for 'self' in a word without the <o> after it. I was trying to mention this to Skot without laying that on his students at the moment, but Skot was intrigued and raised the issue with the class.

I can't remember if it was Skot or one of his students shouted out "autism!" We jumped into a dictionary (pre Etymonline!) and found that same Greek root aut(os)! It turns out they had just been studying autism, and had learned that it can be thought of as a 'condition of the self'. It is associated with the fact that some people have more difficulty 'seeing the world from the perspective of another self'.

Everyone was super keen to see that connection, and that now they could include 'autism' in the morphological family of their other words - as long as they knew that there was a morpheme called a 'connecting vowel letter' that is a kind of affix that can be removed from a base. But it wasn't just the spelling idea -- it was the fact that with that new structure, they could understand the meaning link between words like 'autism' and 'automobile' that don't have that <o>. Without knowing about that structure, they were hindered from thinking about this word while they were making their word web with the basal construction <auto> rather than the actual base <aut>.

I thouth I had a document somewhere with that story, but couldn't find it. Along the way, however, I found a document William Van Cleave had shared with me last year that I had totally forgotten about. When I read it, I was reminded of what a rich scholar William was. In my most recent WW Newsletter I included a tribute to William who tragically passed away recently so suddenly.

I cannot tell you how much I loved reading this account from William that describes his own leisurely journey with these same orthographic concepts but in the context of different words. William shares how he had been exposed to ideas like these and his initial responses including his hesitency to change his thinking/practice at first. But crucially, he didn't take that hesitency as evidence to argue against what I had presented. Just something that he noted and let sit for a while. Over time he kept hitting this issue, and finally he hit a word and a context where he realized the importance of this distinction.

Like everyone, William had every right to take the time he needed to follow this learning. Just like Skot, treating <auto> as a base isn't false, it just isn't complete. I see it as my job to attempt to identify the most productive moments for introducing a new idea. I didn't know Skot's kids. I didn't know they had been studying 'autism' so I let Skot know something he might want to consider if and when to share it with his kids. But since he knew about this related word/topic he correctly realized this was the time to dive in.

I've included an image of the matrix William made in conjunction with the two-page account. I really hope you read it carefully. It is not only a brilliant lesson in orthography, for me it is equally a brilliant lesson in scholarship. As my first mentor in this work reminds us in just about every orthographic conversation, the etymology of the word 'scholar' goes back to the idea of  'leisure'. To be scholarly is to take time and consider ideas -- never to rush. The point is not finding 'the answer' but to deepen understanding, and hopefully to find other rich questions along the way that we would miss if we were rushing to a theoretical 'answer.'

William may be gone, but I expect to keep learning from him -- as will countless others.